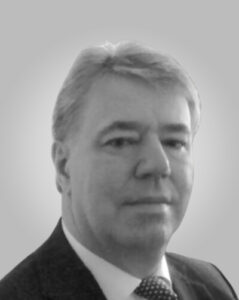 Mark is a polished lawyer with over 30 years of experience in dispute resolution; problem-solving; research; negotiation and advocacy, both written and verbal. Mark practised as a Solicitor for 16 years, in private practice, achieving and regularly exercising Higher Rights of Audience, in both Criminal and Civil jurisdictions as a Partner and Director of legal practice. Significant experience of duty solicitor work in Magistrates court and at police station, still regularly instructed to carry out that work. Able to conduct cases from arrest and as Prosecution and Defence Counsel.

Mark has a Certificate for both Civil and Criminal advocacy. Experience in all courts, including Court of Appeal and Court Martial.

Mark has significant experience and success in high-profile, complex, and technical cases and is able to adapt and practice in a wide array of criminal cases. Particular interest in Proceeds of Crime Act and cyber-related cases. Mark is not fazed in the least by the variety and complexity of instructions and is able to adapt swiftly to modern and emerging areas of law including cyber and technology-related offenses, having the ability to navigate through and identify persuasively, an effective resolution to the client and Courts.

Successfully defended a baby’s father (as a paralegal), charged with murder. Mother was convicted.

Successfully defended a charge of rape.

Represented a client who had been driving when his passenger had been killed.

Defending the case against involvement by Coroner and CPS, the client was convicted of careless driving (days before death by careless driving became law), and his licence endorsed with 9 penalty points.

Successfully represented a male in Coroners Court, who had restrained the deceased by a neck hold. Court deemed his actions self defence, and lawful restraint.

Successfully represented a Muslim client in POCA proceedings, avoiding property being recovered, having argued that his marriage ceremony was only a Nikah (i.e. religious) ceremony, so that property owned by his “wife” could not form a part of Defendant’s available amount.

Successfully represented a client in Court Martial, charged with possession of cocaine. Case dismissed, meaning that Defendant was not dismissed from the Army.

Successfully represented a senior Army officer in Court Martial, charged with theft of army property while serving abroad, over a long period of time. Case dismissed. Officer remained in service.