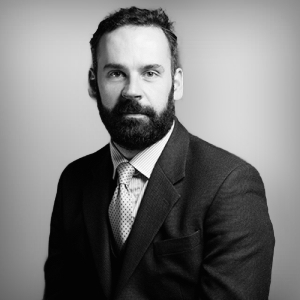 Alex is a criminal barrister specialising in cases that require expert advocacy skills which he approaches with the utmost level of sensitivity and care. His particular specialisms include fraud and serious sexual offences. Alex has also developed a specialist Police Law practice, accepting instructions to advise and represent Officers accused of misconduct across the North of England.

Alex has a varied practice and represents both individual and corporate clients respectively. Alex is called upon to advise professional clients at an early stage of proceedings in respect of strategy and achieving the best outcome for lay clients.

Alex has a reputation for being a highly-skilled, measured, forceful and persuasive advocate. As such Alex is regularly instructed to appear as a leading advocate both domestically and nationally.

Alex has successfully represented clients appearing before major hearings at the Court of Criminal Appeal.

R v E | Derby Crown Court – Successful defence of a man of good character, charged jointly with his wife and other family members in Trial 1 of a crash-for-cash conspiracy to defraud. The case alleged the involvement of the Personal Injury Solicitor in a wide-ranging conspiracy to stage accidents, insert false claimants into vehicles and exaggerate injuries caused. The full PI case files were served along with inter-solicitor and insurer correspondence adding an additional layer of complexity. The defendant was unanimously acquitted following a 3-month trial.

R v M | Newcastle Crown Court – Successful defence of classic car restorer charged with international fraud during the collapse of a previously successful business. The 2-week trial involved an electronic presentation of hundreds of defence exhibits and photographs of work carried out, good working knowledge and understanding of technical details of repair work, and ability to explain and convey the same to the jury.

R v M, B, M | Manchester Crown Court – Successful trial of 3 defendant allegation of robbery, where the remote detached premises was attacked by 3 men in balaclavas at night, and the homeowners forced to empty contents of safe and jewellery. Attempted theft of expensive vehicles was foiled. The defendants were linked by virtue of DNA analysis, ANPR evidence of their vehicle and cell-site analysis linking them to the relevant area. Defendants sentenced to 9-14 years imprisonment.

R v W | Nottingham Crown Court – Successful defence of a 20-year-old defendant of good character charged with rape of associate on a night out. Careful analysis of disclosed unused material relating to phone contact, expert evidence RE: DNA and CCTV footage resulted in a unanimous acquittal.

R v PB | Manchester Crown Court – Successful defence of a nursing assistant charged with a campaign of sexual abuse of an adolescent mental health patient whilst detained on the ward at Cheadle Royal Hospital. The complainant’s father had been convicted at an earlier trial of sexually abusing her prior to her admission, complicating the disclosure process during the 2-week trial. The defendant was unanimously acquitted.